In their early 30s, people born in the early 1980s have average (median) net household wealth of £27,000 per adult – including housing, financial and private pension wealth. This is about half the median wealth that those born in the 1970s had at around the same age (£53,000).

Differences in the economic circumstances of people born at different times and the role of government policy in exacerbating or mitigating those differences, have risen in prominence in recent years.The Work and Pensions Select Committee is currently conducting an inquiry into ‘intergenerational fairness’. The new Prime Minister included the fact that ‘if you’re young, you’ll find it harder than ever before to own your own home’ in a list of ‘injustices’ she intends to fight.

This briefing note provides an up-to-date and comprehensive picture of the incomes and wealth of different cohorts as they have moved through their lives. It is partly an update of previous work by some of the same authors, which focused on those born between the 1940s and the 1970s. The key finding of that research was that, compared with those born 10 years earlier at the same age, those born in the 1960s and 1970s have no higher takehome incomes; have saved no more of their previous take-home income; are less likely to own a home; probably have lower private pension wealth relative to their earnings; and will tend to find that their state pensions replace a smaller proportion of previous earnings. On the other hand, they expect to inherit more wealth – perhaps the main reason they could still hope to be better off than their predecessors in retirement, on average.

It looks like those born in the early 1980s are likely to find it harder than their predecessors to build up wealth in housing and pensions as they age. They have much lower home-ownership rates in early adulthood than any other post-war cohort, and – outside the public sector – have much less access to generous Defined Benefit pension schemes than previous generations did at the same age.

Figure. Homeownership by age, for people born in different decades

The underlying data for this briefing note can be found here.

04 Oct 2016
Broadcast
Time to break promises to pensioners? BBC Radio 4 Analysis
IFS Director Paul Johnson hosts Radio 4 Analysis.
27 Mar 2015
Report summary
The economic circumstances of cohorts born between the 1940s and the 1970s
This summary is based on a report from the IFS, which compares and contrasts the economic circumstances of individuals currently aged between their mid-30s and mid-70s.
23 Apr 2017
Newspaper article
Seven reasons it helps to have rich parents 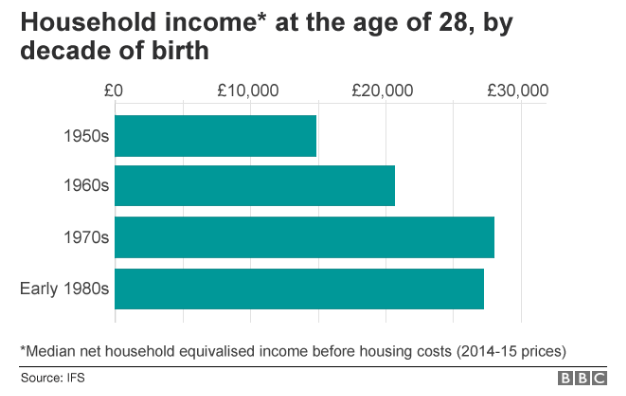 30 Sep 2016
Dataset
Data for Briefing Note 187 - The economic circumstances of different generations: the latest picture
17 Oct 2019
Journal article | Fiscal Studies, Volume 40, Issue 3
Intergenerational differences in income and wealth: evidence from Britain
How do average levels of income and wealth differ in Britain for those born between the 1930s and 1980s?
05 Jan 2017
Briefing note
Inheritances and inequality across and within generations