Next week will see the introduction of significant cuts to the generosity of two parts of the working-age benefits system. From Monday (3rd April), new recipients of employment and support allowance deemed healthy enough to carry out 'work related activities' will get up to £1,500 less each year than existing recipients. From Thursday (6th April) families with new-born third and subsequent children will no longer receive any additional support in recognition of that child through tax credits and universal credit, and support for new born first children will be around £500 a year lower. Because of the restriction to new claims or new births, existing claimants will not see their benefit income fall. But in combination, the changes are expected to reduce government spending by over £5 billion a year in the long run. Below, we consider each reform in turn.

Cut to employment and support allowance

Employment and support allowance (ESA) is the main out of work benefit for working age individuals who are judged not to be ‘fit for work’ due to a health condition. There are currently around 2.2 million individuals claiming ESA, of whom 250,000 are waiting for a health assessment, 1.6 million are in the ‘support group’, and 400,000 are the ‘work-related activity group’ (WRAG). The latter group are those deemed healthy enough to carry out ‘work related activities’, such as CV preparation or skills training.

From next Monday (3rd April) new WRAG claimants will receive £73.10 a week – the same as jobseekers’ allowance (JSA) claimants – rather than £102.15 a week as is currently the case (those in the support group are unaffected). This change will not create immediate losses of benefit income, because only new recipients are affected. Ultimately though, of course, all claims will be assessed under the new less generous rules. To give a sense of how quickly this will cut the generosity of benefits in practice, in the recent past around 60,000 people a year have started an ESA claim and ended up in WRAG - so we would expect approximately that number to get less money over the coming year than they would otherwise have got. In the long run this is expected to save the government about £650 million per year, with around 500,000 recipients getting £1,400 a year less than they would otherwise have got, on average.

What do we know about the sorts of people who are placed in the ESA WRAG? First, around half of them are entitled to ESA because of mental or behavioural disorders. Second, they tend to be somewhat older than JSA claimants, with about half being between 50 and the state pension age compared to about a quarter for JSA. Third, they tend to be on ESA for a relatively long time, as shown in Figure 1. Hence, while this change will align the weekly entitlements of ESA WRAG and JSA claimants, it is worth bearing in mind that the ESA claimants will tend to live on these amounts for substantially longer – around four in five WRAG claimants have been claiming for over two years, compared to less than one in five for JSA.

Figure 1. Proportion of claimants by length of claim, various benefits 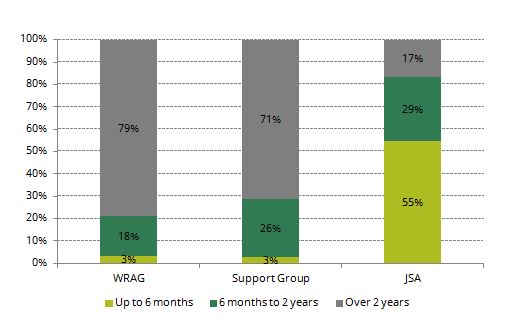 Note: Before being placed in WRAG or support group or being declared ‘fit to work’, claimants must go through an assessment, during which they are entitled only to the basic JSA rate. The above data include time spent in the assessment phase, which typically takes at least 13 weeks. This is part of the reason why the ‘up to 6 months’ bars are small for the WRAG and support group. However, since this policy only affects claimants post-assessment, the left-hand stacked bar does give an accurate picture of claim durations for the group affected by the policy change. Source: DWP Tabulation Tool: Employment and Support Allowance, May 2016, Office for National Statistics, UK Labour Market: March 2017, Table BEN02

People might respond to this change in several ways. First, they may not choose to claim ESA in the first place: since JSA will afford the same financial support as WRAG, the financial incentives to go through the medical assessment rather than accept the additional work conditions of JSA are reduced. Second, those placed in the WRAG might challenge the decision to try to get into the support group and receive the now much higher entitlement. At the moment around 20% of those placed in WRAG challenge the decision at least once, so there is considerable scope for this to become more prevalent. Third, as the government’s policy costing document points out, they may try to claim other benefits. The main option available here is personal independence payment, a non-means tested disability benefit. Not only does this provide income directly (between £22 and £141.10 per week), but receipt can also be an automatic passport to higher ESA entitlements. Fourth, they could move into work. Claimants may be constrained in the extent to which they can respond in this way – WRAG claimants have after all been declared by the government to have ‘limited capability for work’. On the other hand, a DWP survey found that 30% of WRAG claimants are already looking for work, and some research suggests that employment decisions among the disabled can be sensitive to the level of disability payments. However, many – perhaps the majority – will not respond in any of these ways and will therefore have to make do with an average of £1,400 a year less than they would otherwise have got.

Cut to tax credits and universal credit for families with children

Since the changes only affect families with new births and then (towards the end of next year) new claims, no one will see their benefit income fall between one period and the next as a result of this policy. But these are substantial changes to the long run generosity of the system, expected to reduce government spending by a significant £5 billion a year in the long run. About £3 billion of that £5 billion is expected to come through limiting support to two children, which means substantial cuts in support for larger families. Eventually the reform will mean about 600,000 three child families getting around £2,500 a year on average less than they would have got, with a further 300,000 families with four or more children getting £7,000 a year less on average. The remaining £2 billion annual long-run saving comes from removing the £545 'family element', which will ultimately affect around 4 million families (on top of any losses from the limiting of support to two children).

What kinds of families will lose from these changes in the long run? About two thirds of those families affected will have at least one adult in paid work. Looking specifically at the 900,000 families with three or more children currently on tax credits – the group who, if treated under the new system, would stand to lose particularly large amounts - around half (52%) are couples with at least one adult in work and a further 14% are working lone parents, while 14% are workless couples and 20% are workless lone parents.

Figure 2 puts these cuts to tax credits and universal credit in their historical context, showing how maximum child-related benefit entitlements for families with different numbers of children have evolved (by ‘maximum’, we mean the amount payable if income and assets are low enough for entitlement not to be reduced by the means test). Support in 2020 for new claimants with three or more children (the far right-hand bar) will be much less generous in real terms than when tax credits in their current form were introduced in 2003. However, real-terms entitlement will still be higher for such families than it was when Labour came to office in 1997, such were the increases in generosity in the late 1990s and early 2000s. 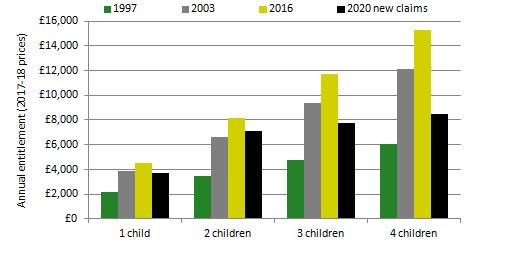 Note: Figures include entitlement to Child Benefit, Child Tax Credit and child-related components of Income Support and Universal Credit. Housing-related benefits are not included. All amounts are calculated for a couple with no private income.

How might people respond to these changes? The cut to the generosity of means-tested benefits for families with children will tend to strengthen the financial work incentives of the parents – who will have less support to potentially lose by increasing their earnings - and this could lead to increased employment rates. On the other hand, the decision to reduce support for new (but not existing) claimants from November 2018 could actually create strong disincentives to work (or to earn more) in some cases. For example, a parent on tax credits offered a one-year fixed term contract after November 2017 would want to take into account that, if they lost tax credit eligibility for that year and then became eligible again after that, they would be treated under the much less generous rules for new claimants.

As well as potentially affecting work decisions, the government has explicitly stated that it hopes to affect the decisions low-income families make about how many children to have. There is some evidence that at least the timing of births in the UK has been affected by past changes to the generosity of benefits, but no conclusive evidence on whether such changes affect the number of children families choose to have.

The government also argues that removing means-tested support for third and subsequent children improves the fairness of the system, by ensuring low-income families face more of the costs of choosing to have additional children. But whether the aim of the policy is to make benefit recipients face more of the financial costs of choosing to have more children, or to affect their actual decisions around how many children to have, it is unclear why the new rules will also apply to new claimants with dependent children of any age from the end of next year. This hits families who made the decision to have a child before the new regime was in place. Of course, widening the scope of the policy in this way will bring some of the long-run savings forward into the end of this parliament.

Seven reasons it helps to have rich parents

This article on the BBC website looks at social mobility and how it compares now to previous generations.