The Conservatives, Labour and the Liberal Democrats have all announced commitments for NHS spending in their manifestos. However, the amounts, timing and periods covered by these pledges vary by party. How do their plans for health spending in England really compare and what are the implications once the costs of demographic change are accounted for?

Under the current government’s plans set out in the 2015 Spending Review, Department of Health (DH) spending in England will increase by an average 0.8% per year in real terms between 2017–18 and 2020–21. This would increase spending from around £124 billion to around £127 billion (in today’s prices), as shown in Figure 1.

The Conservative, Labour and Liberal Democrat policies are as follows:

The likely path for DH spending under each of these three parties’ plans is shown in Figure 1. All are proposing increasing health spending in real terms over the next parliament, with Labour being the most generous and the Conservatives the least generous. However, it is worth nothing that all these planned increases in health spending are well below the long run average; historically UK health spending has grown by an average 4% per year in real terms. Figure 1 shows that relative to spending having grown by 4% per year since 2009–10, the difference between the parties’ plans going forwards is modest. The next parliament will therefore continue to be an incredibly challenging period for the NHS, regardless of who wins the election. 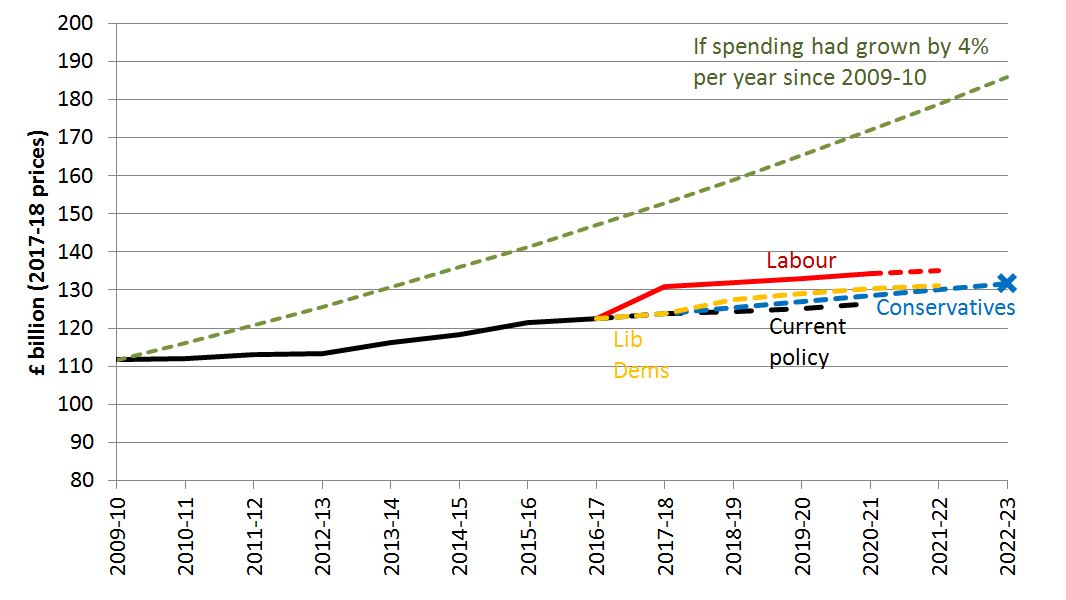 Notes and sources: See notes 1-4 below.

To put the planned spending increases in context, it is important to remember the population is both growing and ageing. Between 2016 and 2021, the population in England is expected to grow by 3.7%, with the population aged 65 and over expected to grow by 9.2%, and the population aged 85 and over by 14.5%. This has important implications for NHS spending, since older individuals typically use more (and more expensive) health care than younger individuals. For example, average health spending on a 65 year old is estimated to be double that on a 30 year old. The ratio rises steeply at older ages, with average spending on a 70 year old three times, and spending on a 90 year old almost eight times, that on a 30 year old. Real NHS spending would therefore need to increase by 1.2% each year over the next parliament just to keep up with demographic change. 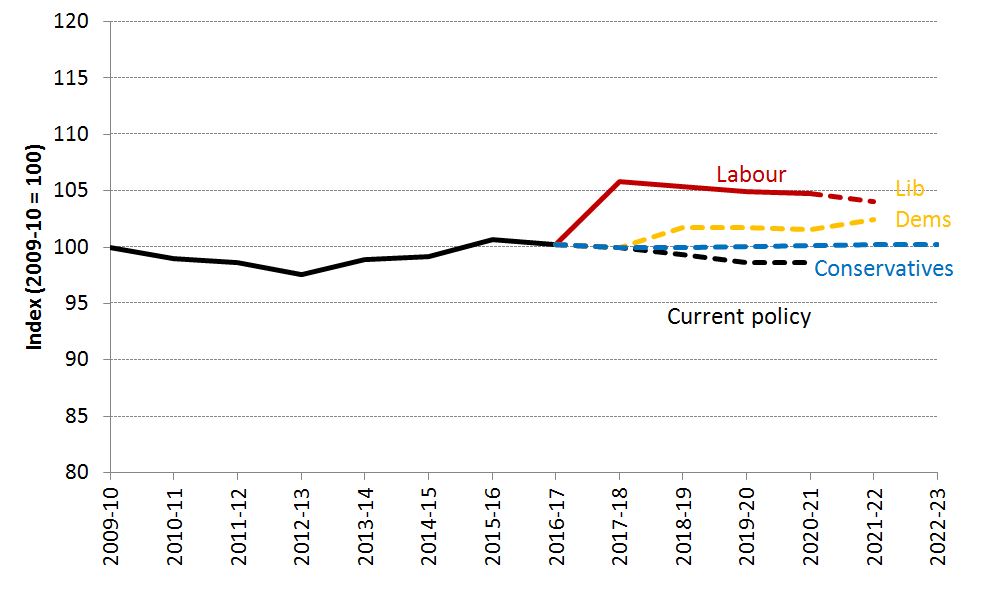 Notes and sources: See notes 1-4 below.

While the Conservatives', Labour's and the Liberal Democrats’ planned spending increases would be sufficient to meet demographic pressure in the short-run, it is important to note that the NHS faces cost and demand pressures over and above those that arise from demographic change. For example the increasing prevalence of chronic conditions, rising real wages and the development of new medical technologies all tend to push up health spending.

The demographic and other cost pressures facing the NHS are not new, and nor are they going to go away. The latest OBR estimate is that between 2016–17 and 2066–67 demographic pressures could increase health spending by 0.8% of national income, while demographic and other cost pressures together could push health spending up by 5.3% of national income, a sum equivalent to £109 billion in today’s terms. Funding such an increase in spending would require substantial tax increases or substantial cuts to other areas of public spending, which future governments may find difficult. Given this, the next government would be wise to consider these long run trends carefully, and start focusing on finding and implementing a long term solution to these funding pressures now. In the long run the NHS would be better served by a serious attempt to address these issues in a coherent and systematic fashion, than by the government just announcing further short term funding fixes.

[2] Labour’s planned £8.4 billion increase in spending includes £5.8 billion for additional day-to-day spending, £2.0 billion for additional capital spending, and £0.6 billion to reinstate nurse bursaries. Labour’s spending plans are only specified relative to current government plans and interpreting this commitment is complicated by the fact that current government plans for DH spending do not extend as far as 2021–22; the 2015 Spending Review only set the department’s budget as far as 2020–21. However, if we assume that current government policy would be to increase the DH budget between 2020–21 and 2021–22 in line with the average nominal increase between 2016–17 and 2020–21 (a 2.5% cash terms increase, implying a 0.6% real terms increase), that would suggest Labour plan to spend around £135 billion (in today’s prices) in 2021–22.

[3] We assume that, under the Liberal Democrat proposals, £2 billion of the £6 billion they plan to raise from increasing income tax would be set aside for social care, and that of the remaining £4 billion 92% would be used to increase NHS spending in England (with the remaining 8% being used to increase spending in Wales and Northern Ireland). As with Labour, the Liberal Democrat plans refer to additional funding above the current government’s existing spending plans. We therefore again assume that current government policy would be to increase the nominal DH budget between 2020–21 and 2021–22 in line with the average nominal increase between 2016–17 and 2020–21.

[4] Previous spending and future spending plans (2009–10 to 2019–20) from HM Treasury Public Expenditure Statistical Analyses 2016.  2020–21 spending plans from the 2015 Spending Review.  GDP Deflator from OBR, 31 March 2017. Population estimates and projections for England are from the Office for National Statistics.