At this election, the Conservatives, Labour and Liberal Democrats are all proposing extra spending on 16-18 education over the course of the next parliament. The Conservatives and Liberal Democrats would do enough to keep spending per 16-18 year-old pupil constant in real terms. Labour propose increasing spend per pupil by 8% in real terms. The Labour and Conservative proposals would represent larger increases than the parties’ respective commitments on schools spending per pupil for younger pupils. But all would leave spending per 16-18 year-old pupil around 10% lower than the parties’ respective proposals for secondary schools.

In this observation, we examine the main parties’ proposals for spending on 16-18 education in England, which includes students in School Sixth Forms, Sixth Form Colleges and Further Education Colleges. This area of education receives considerably less attention in public debate than other areas and seems not to have been a major spending priority for policymakers over recent decades.

Over the last 30 years, spending on education for 16 to 18 year olds has fared substantially worse than other areas of education spending.  For example, the figure below shows that spending per 16-18 year-old pupil in 1990–91 was more than 50% higher than spending per secondary school pupil, but by 2017–18 it was 13% lower. It is not clear why students in 16-18 education should receive 13% less in resources than pupils in secondary schools, or indeed 40% less than students in higher education (see here).

The relative decline in 16-18 education spending per pupil was the result of deeper cuts in the 1990s, slower growth in the 2000s, and being one of the only areas of education spending to be cut under the coalition government. Further real-terms cuts were planned in the latest Spending Review in 2015, which would have reduced spending per 16-18 year-old pupil to £5,200 by the end of the Spending Review period in 2019-20 (in 2017–18 prices, as are all figures in this observation). This would have returned it to around its 2002 per-pupil level, and lower than the level seen at the start of the 1990s.

In Budget 2017, the Conservative government committed to following the recommendations of the Sainsbury review for post-16 education. These reforms would introduce ‘T-levels’ for technical education – slimming down the thousands of vocational qualifications currently on offer to 15 different lines of learning - and increase the number of teaching hours on some technical routes by more than 50%. The Conservative government committed £420 million of additional investment in 2021-22 for the implementation of these reforms.

The Conservative manifesto reaffirms their commitment to these plans, which would effectively result in a real-terms freeze in 16-18 spending per pupil over the next parliament. This has a similar effect to the Liberal Democrats’ proposal to protect per pupil funding of schools and colleges in real terms. However, these plans would still leave spending per pupil on 16 to 18 year olds in 2021-22 around 14% below its peak in 2011-12. In the case of the Conservatives, because plans for 16-18 education are slightly more generous than those for schools, the gap between 16-18 education and secondary school spending per student would shrink slightly from its current level of 13% to around 10% in 2021–22. 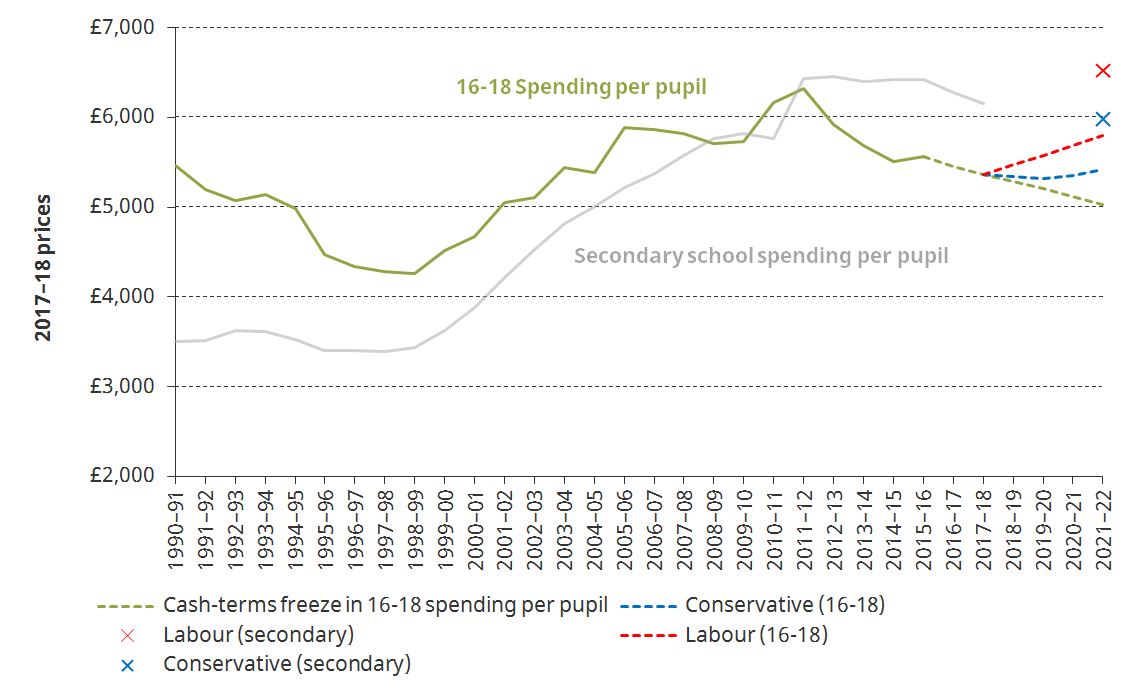 The Labour manifesto commits to “bring funding for 16 to 18-year-olds in line with Key Stage 4 baselines," which means that they would seek to align the basic amount provided for a pupil aged 11-16 with that provided for a pupil aged 16-18 (these basic amounts are the most important, but not the only, element of each funding formula).  The manifesto includes around £390 million in 2021-22 to achieve this, which would be additional to the funding proposed by the Conservatives to implement the Sainsbury reform. If implemented, Labour’s proposals would increase 16-18 spending per pupil to £5,800, a real increase of 8% over the parliament. However, this would still leave spending per student in 16-18 education about 11% below that for secondary schools in 2021–22, which under Labour’s manifesto plans would be about £6,500.

As with spending on schools, there is a clear difference between the Conservative and Labour plans. Labour propose an 8% real-terms increase in funding per 16-18 year-old pupil over the parliament, whereas the Conservatives and Liberal Democrats propose a real-terms freeze. Both of the Conservative and Labour proposals for spending on 16-18 year old are more generous than their respective plans for school spending, which would go a small way to reversing the relative trends in spending on pupils of different ages seen over the last thirty years. However, in each case, spending per student in 16-18 education would remain about 10% lower than it would be for secondary schools.