Election battleground in the playground?

School funding in England has shot up the political agenda in recent months and could well be a major battleground at the upcoming general election. In this observation, we set out what current government plans imply for spending on schools in England, what each of the main parties has said to date and the potential implications of freezing school spending in real-terms after the election.

Spending per pupil in primary and secondary schools: actual and plans 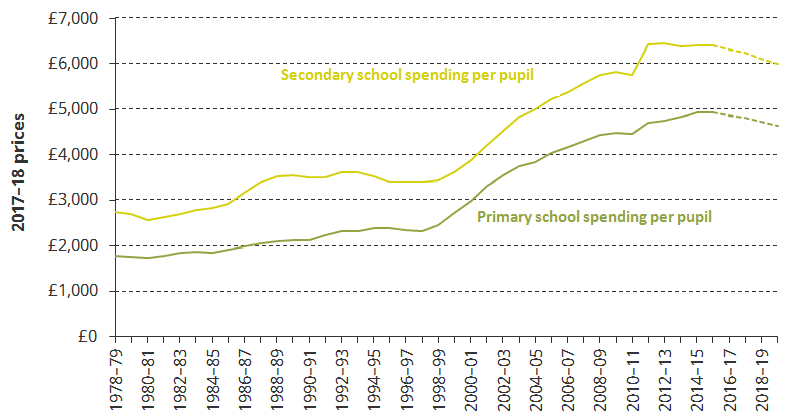 As well as changing the size of the school spending cake, the current government has proposed a different way of dividing this up amongst schools. In particular, a recent consultation proposed introducing a national funding formula for schools in England (https://www.gov.uk/government/consultations/schools-national-funding-formula-stage-2), which would replace the 152 different funding formulae used by local authorities in England (for more details, see our recent briefing note https://www.ifs.org.uk/publications/9075). The current system of funding schools is out-of-date and in need of reform. We haven’t had a proper funding formula since the early 2000s, which has allowed various inequities across areas to develop, which will only grow if left unaddressed. It is to their credit that the outgoing government came forward with detailed proposals for a funding formula, and to their discredit that previous governments kicked this particular can down the road.

Such a reform would always produce relative winners and losers. With overall funding so tight it will also result in absolute losers. Transitional arrangements mean that no school will see a cash-terms fall in funding per pupil of more than 3% between 2017–18 and 2019–20, and no school can receive a gain of more than 5.6%. However, combined with real-terms cuts to overall school spending, this means that schools facing the biggest losses will see a real-terms fall in funding per pupil of close to 10% between 2015-16 and 2019-20. Even the biggest winners will get only a real-terms freeze over the same time frame.

We don’t yet know what each of the main parties will propose at the upcoming general election. A re-elected Conservative government could choose to implement existing plans up to 2019–20, or could decide to top them up. The government seems committed to the principle of a national funding formula, but is yet to publish updated proposals following the consultation.

How things would change under a Labour government is not yet clear. What we do know is that Labour seems to support the principle of a national funding formula, with the Shadow Education Secretary Angela Rayner recently saying “Now the principle behind a fair funding formula, I absolutely, whole-heartedly agree with it.” (https://theschoolbusblog.net/2017/02/21/exclusive-angela-rayner-and-the-national-funding-formula/). Labour also opposes real-terms cuts to school spending per pupil. For instance, the Shadow Chancellor John McDonnell, recently told the NUT conference that “Our priorities are to oppose the cut in funding per pupil...”  (http://www.independent.co.uk/news/uk/home-news/john-mcdonnell-education-seventies-jeremy-corbyn-labour-spending-cuts-seventies-a7684556.html).

What would the implications be of freezing school spending per pupil in real-terms?

As the table below shows, this would equate to additional spending on schools of around £1 billion in 2019-20 as compared with existing government plans, or £2 billion of extra spending by 2021-22 compared with 2017–18.  This extra money would make it a bit easier to implement school funding reform as the baseline would be a real-terms freeze rather than a real-terms cut. But note that it would inevitably still imply real-terms cuts for relative losers from a national funding formula if this policy was pursued. Both implementing a national formula and ensuring no real terms cut for any school would require more money than that.

Of course any additional money spent on schools is money that could not be spent elsewhere.

Over the course of the campaign we will likely find out more about commitments made by the major political parties on school funding and other aspects of schools policy. We will therefore update this analysis as more information becomes available.

What would it cost to maintain current school spending levels?

This article was published in Schools Week.

How does the government spend your money?