Income tax and benefits: the Liberal Democrats and Labour compared

The Liberal Democrat manifesto published today includes commitments to increase all rates of income tax by 1 percentage point as well as cancelling a number of significant benefit cuts and reversing others. In this observation we provide an overview of these proposals and compare them to the income tax and benefit proposals published by Labour yesterday.

The Liberal Democrats have proposed a rise in income tax that is very broad-based, but relatively modest per person, raising all rates by 1 percentage point. It would raise around £6bn per year and would affect the roughly 30 million adults who pay income tax. Bear in mind that nearly 45% of adults pay no income tax at all, as their incomes are below the personal allowance.

This would clearly hit people further down the income distribution than Labour’s income tax proposals announced yesterday and analysed in detail here, since Labour’s policy would affect only those individuals on at least £80,000 per year: the top 2% of adults or 4% of income taxpayers. The Figure below compares the increases in income tax bills at each level of taxable income under the two parties’ proposals. It shows that:

The revenue raised by the Liberal Democrats’ income tax rises, at around £6bn per year, is considerably more certain than the revenue raised by Labour’s. Essentially the explanation is that the revenue raised by the Liberal Democrats’ income tax rise would be far less dependent on a small group at the very top, whom evidence suggests are relatively responsive but for whom there is also much uncertainty about the degree of responsiveness. As we discussed in detail yesterday (see final section here), after accounting for the fact that some taxpayers will respond to higher tax rates by reducing their taxable incomes, the middle of a plausible range of estimates for the revenue raised by Labour’s proposal is probably around £2-3 billion. But it could easily raise something like the £4½ billion that Labour expects or nothing at all. 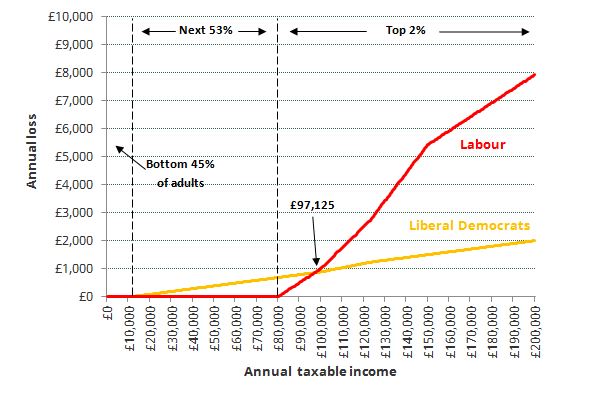 The Liberal Democrats have also proposed a number of increases in benefits levels relative to current policy plans. Most are reversals of benefit cuts implemented since 2010, or cancellations of cuts that have not yet been fully implemented but are in the pipeline: in fact, the Liberal Democrats propose to reverse nearly all of the significant cuts to working-age benefits that are currently planned over the next few years.

The Table below sets out the Liberal Democrat benefit proposals alongside those made in the Labour manifesto yesterday, along with their estimated long-run cost. For both parties, the policies listed in the Table cover around 90% of the total proposed increases in benefit spending (the other benefit changes are listed at the bottom of the observation).

The Liberal Democrats’ biggest commitments are the reversal of cuts to child tax credit , including the limiting of support to two children (at a long run cost of £5 billion a year), the ending of the freeze on most working-age benefits (£3 billion), and the reversal of work allowance cuts in universal credit (£3 billion). Note that the costings given in the  Liberal Democrat manifesto are for the short run (2019-20), but the first of these policies costs significantly more in the long run, as the cuts only affects new births (and some new claimants).

In comparison with the Liberal Democrats, Labour’s plans for benefits are modest – their manifesto allocates £2 billion to reviewing the cuts to Universal Credit, and another £2.6 billion to other benefit changes.[1]  It does not allocate any additional funds on top of that to ending the freeze on working-age benefits or reversing cuts to child tax credit.  Both parties commit to increases in benefits that come with a much lower price tag, such as scrapping the so-called “bedroom tax” (at a cost of £400 million a year) and restoring automatic housing benefit entitlement to 18-21 year olds (around £30 million).

Notes: The costing for 'reverse cuts to UC' refers to the cuts to work allowances announced in Summer Budget 2015. The Liberal Democrat manifesto states their intention to reverse these cuts, while the Labour manifesto allocates £2bn per year 'for review of [UC] cuts and how best to reverse them'. Labour’s manifesto commits to increasing carer’s allowance to the level of job seekers’ allowance (at a cost of £0.2bn), while the Liberal Democrats’ commits to extending eligibility of carer’s allowance (at a cost of £0.4bn). For a list of policies in the manifesto not included above, see the notes at the end of the observation.
Sources: See end of observation.

This observation focuses just on income tax and benefits, so is only part of the bigger picture. Both parties propose other tax rises (such as higher rates of corporation tax) which would also ultimately affect the incomes of UK households. And both parties propose increases in public spending, particularly on education and the NHS.

Further notes to the Table:

Sources for the Table:

[1] The Labour manifesto allocates “£2 billion of additional funding for Universal Credit for review of cuts and how best to reverse them” though it was suggested later that some of the funds could be used instead to ameliorate the benefit freeze.

Where do taxes come from?

Where do taxes come from? Helen Miller, Associate Director of the Institute for Fiscal Studies, answers this commonly asked question.