Labour’s Higher Education proposals will cost £8bn per year, although increase the deficit by more. Graduates who earn most in future would benefit most

Yesterday’s leaked Labour manifesto included a commitment to scrap tuition fees. This follows their previously announced plans to bring back maintenance grants for the poorest students. Both would represent a major reversal of the last 20 years of Higher Education (HE) policy. These proposals increase the upfront government contribution to HE by £1 billion compared to the current system. However, these policies would increase the government deficit by around £12.7 billion, of which £11 billion is from scrapping fees, because loans made to students don’t add to the deficit. The forecast long-run cost is lower, at around £8 billion, because a significant proportion of student loans are not expected to be repaid.

In this observation, we highlight the expected short-run impact on the public finances, the impact on graduates and the wider policy implications. We focus on the impact in England because Higher Education is devolved; however, the Barnett formula would add to the cost of this policy.

Table 1 summarises our modelling of the impact of the reforms. Replacing fees with teaching grants would increase the up-front government contribution to HE by £1 billion compared to the current system. This is driven by the additional spending on the fees of students who do not take out student loans and paid some or all of their fees up front. Otherwise, the up-front cash outlay – and hence contribution to government debt – is unchanged.

The big difference, however, is in the impact on the measure of the deficit that we typically focus on. This is entirely because of the way these things are accounted for by the government; teaching grants count towards the deficit in the short run, while tuition fee loans do not. Consequently, scrapping fees adds around £11 billion to the deficit. This is £10 billion for current borrowers and an extra £1 billion for the current self-financers.

The long-run impact on government finances is smaller than this, because some – though not all – of the tuition fee loans would have been repaid. We estimate that the present value (to government) of long-run student repayments is £6.5 billion. This reflects the real long-run cost of removing tuition fees and is therefore a better estimate of the true cost of the policy to the government. This is still a substantial amount.

Adding free maintenance grants to this has a similar short-run effect; up front government outlays are unchanged (assuming student support in the form of “cash in pockets” is held constant), but about £2 billion is added to the deficit. However, without tuition loans, a lot of this maintenance debt would have been repaid. Consequently the long run cost of reintroducing grants will now be much larger; around £1.5 billion. Combined, this results in a long run cost of £8 billion (see End Note 1).

We now turn to the impact for students. These reforms would dramatically reduce the level of debt students hold on graduation. Average debt amongst borrowers would fall from £50,800 to £22,400 with the removal of fees and again to £16,600 with the reinstatement of maintenance grants for poorer students. The remainder is the maintenance loans that all students can access.

Clearly, average student repayments would decline as a result. However, because student loans are repaid as a proportion of income, this average figure has very different impacts across the earnings distribution (shown in Figure 1). As high-earning graduates repay the largest share of their student loans, they benefit the most from the removal of tuition fees. The repayments from the highest-earning graduates (those earning more than around £100,000 a year on average, over their lifetime) would fall by 67% from £93,000 to £30,000, while the lowest-earning would benefit very little. 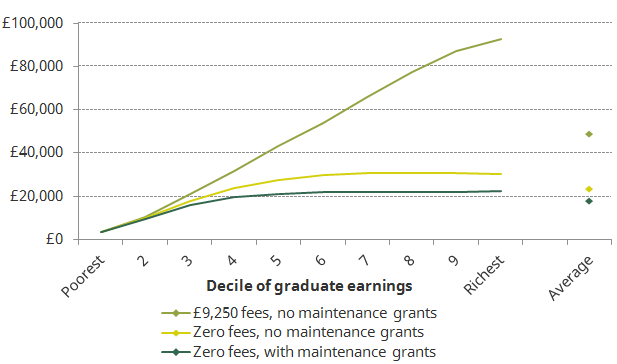 A striking figure from the current system is the fact that more than three-quarters of individuals expected to have some debt written off at the end of the 30 year repayment periods. For this majority of individuals, student loans are almost indistinguishable from an additional 9% “graduate tax” on their earnings. With fees removed, this share would decline considerably to around 37%, and further still – to 29% – with the removal of maintenance loans.

These Labour proposals would represent a radical shift in the funding of HE in England, with new cohorts of students facing a drastically different system to their recent predecessors. This has a significant impact on the amount they can expect to pay for HE over their lifetime. Students who entered HE in 2011 are expected to contribute around £23,000 in current prices, whereas students entering HE in 2017–18 will contribute more than twice that (111% more). Under these Labour proposals, future entrants would only pay £17,800 on average.

There might be concerns about the equity of this; students who paid £9,000 fees would be doubly hit by large student debts, and the tighter public finances resulting from the subsequent introduction of free tuition fees. One option would be to compensate these students by clearing or reducing their tuition fee debts. This would be extremely costly, however, as the outstanding stock of loans for these graduates is around £30 billion.

Up to this point we have assumed that university funding is unchanged as lost fee income is replaced by increased grants. However, a potential disadvantage of this reform is the concern that it may eventually lead to university resources being squeezed due to pressure on public finances – this was a key justification for the introduction and subsequent increase of tuition fees. This is particularly pertinent when considering the fact that the cap in student numbers has now been removed. Although we have yet to see increases in student numbers, this would be more likely to occur when there are no tuition fees. Large student number increases would increase government cost, and potentially reduce funding-per-student at universities as it did through the 1980s and 1990s.

On the other hand, one disadvantage of the current system is that the government has limited flexibility to target government funding at high priority subjects or students without increasing cost; as so much of the long-run taxpayer contribution to HE is through loans that are not repaid, this affords little control to government as to where the money goes – it is concentrated on students who do not have the highest future earnings, rather than those who provide the highest social return. Under the Labour party proposals, the vast majority of government funding is through grants which could – for better or worse – be targeted at specific institutions, subjects or students in a cost-neutral way.

1. The order with which we remove fees and add grants affects the estimates of their individual contribution to the cost. If fees are removed first, scrapping them costs around £6.5 billion, while reintroducing maintenance grants costs £1.5 billion. If maintenance grants are added first, their reintroduction costs £500 million and scrapping fees costs £7.5 billion. This is driven by debts not being fully repaid by graduates. Note that the £500 million estimate here is larger than the £270 million estimated by IFS in 2015. This is driven by the reduction in the discount rate that means future repayments are now valued more highly.

2. Note: All figures are given in 2017 prices, in net present value terms using the government discount rate of RPI + 0.7%. These figures apply to young full-time English-domiciled students studying at the 90 largest universities in England starting in 2017–18. Cohort of students is held constant across systems. We assume that all students taking out loans do so for the full amount to which they are entitled, that there is no dropout from university, that graduates repay according to the repayment schedule and that they have low unearned income. This assumes cohort size of 365,700 based on 2015–16 Higher Education Statistics Agency (HESA) estimates of English-domiciled first-year full-time undergraduates. We assume 10% non-take-up of loans, approximately in line with Student Loans Company (SLC) data on loan uptake. We assume full take-up of grants. Source: Authors’ calculations using IFS’s graduate repayments model.

3. Note: Figures in 2017 prices, deflated using CPI inflation, not discounted. These figures apply to young full-time English-domiciled students studying at the 90 largest universities in England starting in 2017–18. Cohort of students is held constant across systems. We assume that all students take out the full loans to which they are entitled, that there is no dropout from university, that graduates repay according to the repayment schedule and that they have low unearned income. Source: Authors’ calculations using IFS’s graduate repayments model.