Today’s Conservative manifesto announced that from 2020 onwards the state pension would be increased over time in line with average earnings or inflation whichever is highest – the so-called ‘Double Lock’. In this observation we show that this is very similar to sticking with the Triple Lock, and does little to resolve the pressures an ageing population will put on the public finances over the years to come.

The Figure shows projected state pension spending as a share of national income up to 2066–67 (based on the latest Office for Budget Responsibility Fiscal Sustainability Report, and not incorporating the recommendations of the recent Cridland Review) under three uprating rules: average earnings, the double lock and the triple lock. As we have noted before, half of the increase in state pension spending forecast over the next 50 years (0.9% of national income, or nearly £20 billion in today’s terms) is explained by the triple lock, rather than other factors.

As the figure makes clear, moving to a double lock does very little to help. State pension spending in fifty years time is only 0.2% of national income lower (less than £5 billion in today’s terms). In other words, moving to a double lock undoes only around a quarter of the damage done by the triple lock to the long-run sustainability of the public finances. So with the double lock in place spending on the state pension would still be projected to increase by 1.6% of national income (a little over £30 billion in today’s terms) over the next fifty years, with over 40% of this increase being explained by the double lock  (relative to increasing in line with average earnings) rather than other factors.

The fundamental reason for this is that it is pretty rare for both average earnings and inflation to be below 2.5%. Hence getting rid of the 2.5% element of the triple lock does little to change the projected long-run generosity of the state pension. 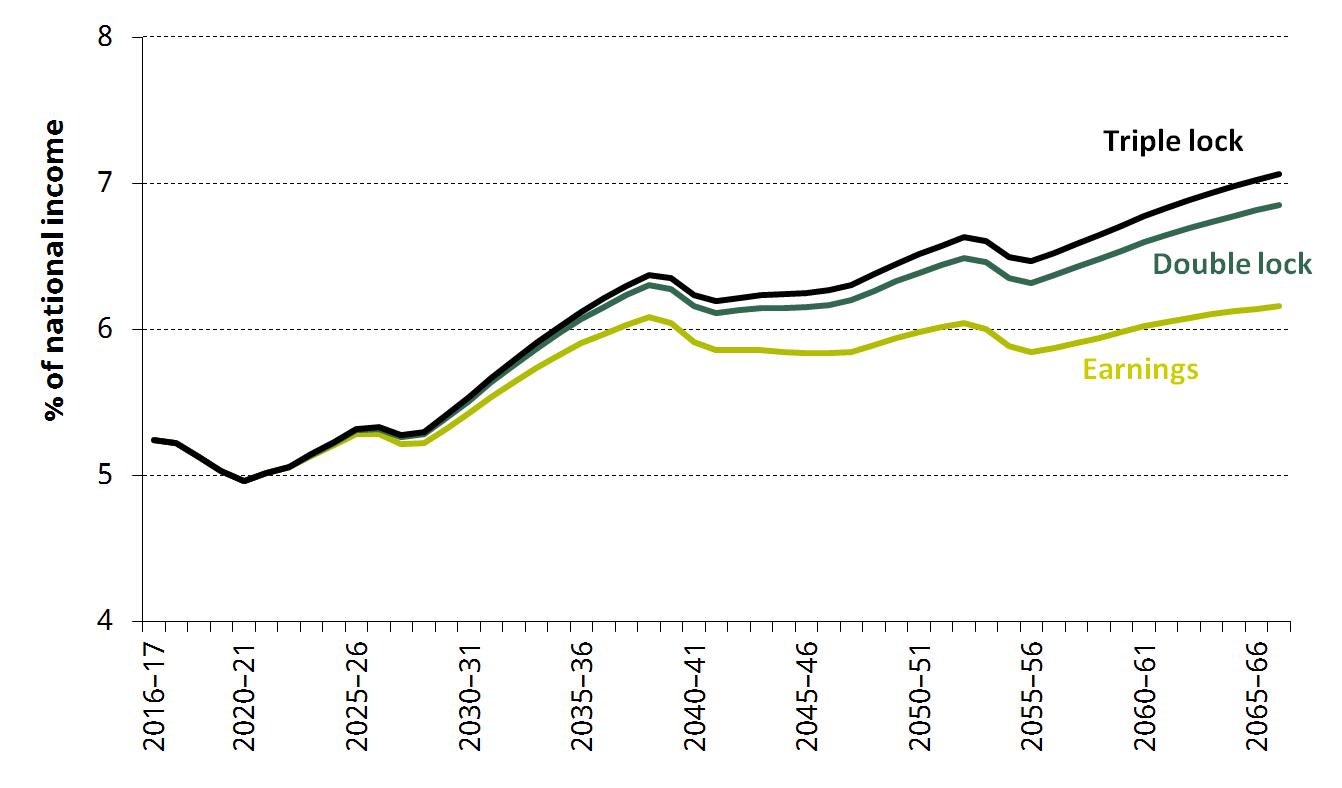 We will be holding a press event on party manifestos on Tuesday 23 May 2017 at Church House Westminster, 10:00-12:00. To register, please email events@ifs.org.uk.

You might have a different set of objectives when choosing how to uprate the state pension, and different objectives could lead to different choices. But whatever your objectives, neither the triple lock nor the double lock is the right answer.