Public sector pay in the next parliament

This briefing note analyses the Conservative, Labour and Liberal Democrat plans for public sector pay, and what the implications of their policies are for the public sector.

The Labour Party and the Liberal Democrat parties have in their respective manifestos pledged to raise public sector pay faster than is currently planned by the government. The Labour party manifesto pledges to “end the public sector pay cap”. Other statements from Shadow ministers imply that this means returning to increasing pay in line with the recommendations of Pay Review Bodies.[1] The Liberal Democrat manifesto says it would “lift the cap on public sector pay” by increasing wages in line with inflation instead of the 1% per year up to 2019–20.

Increasing public sector pay would directly raise the pay of just over 5.1 million people who work for central or local government. As Figure 1 shows, since early 2015 the public sector workforce has barely changed, although there has been a large decline of around 400,000 (8%) since 2010Q1. Most of this fall in public sector employment occurred between 2010 and mid 2012. 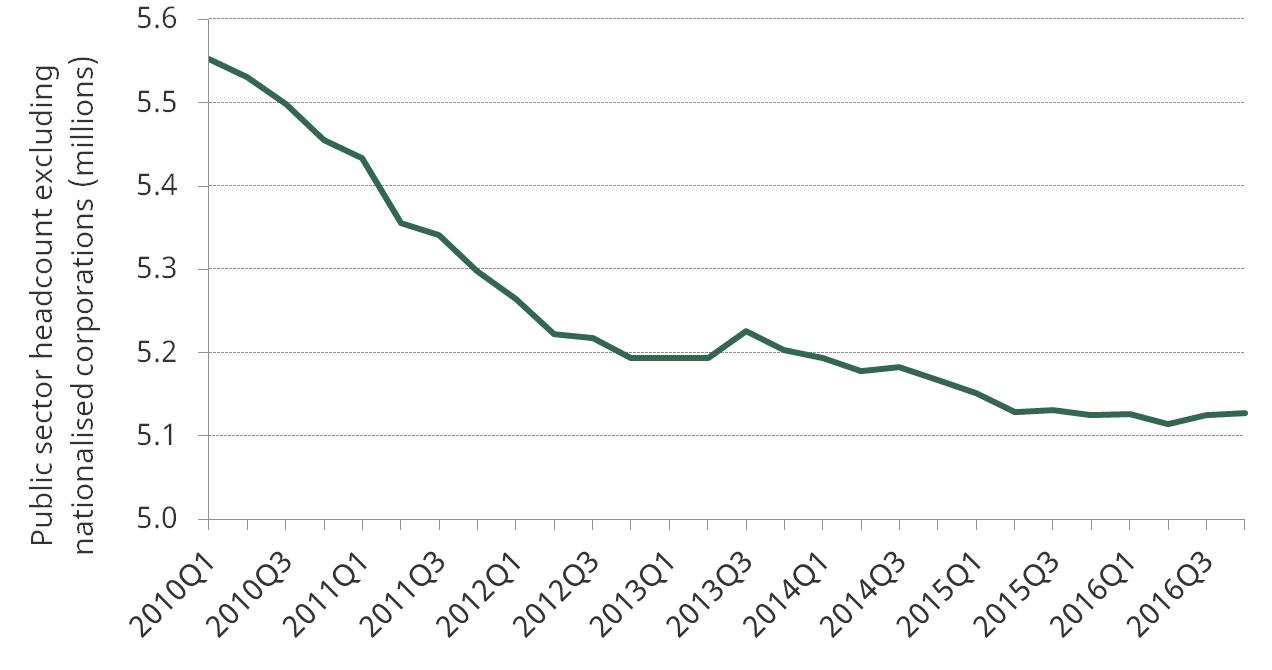 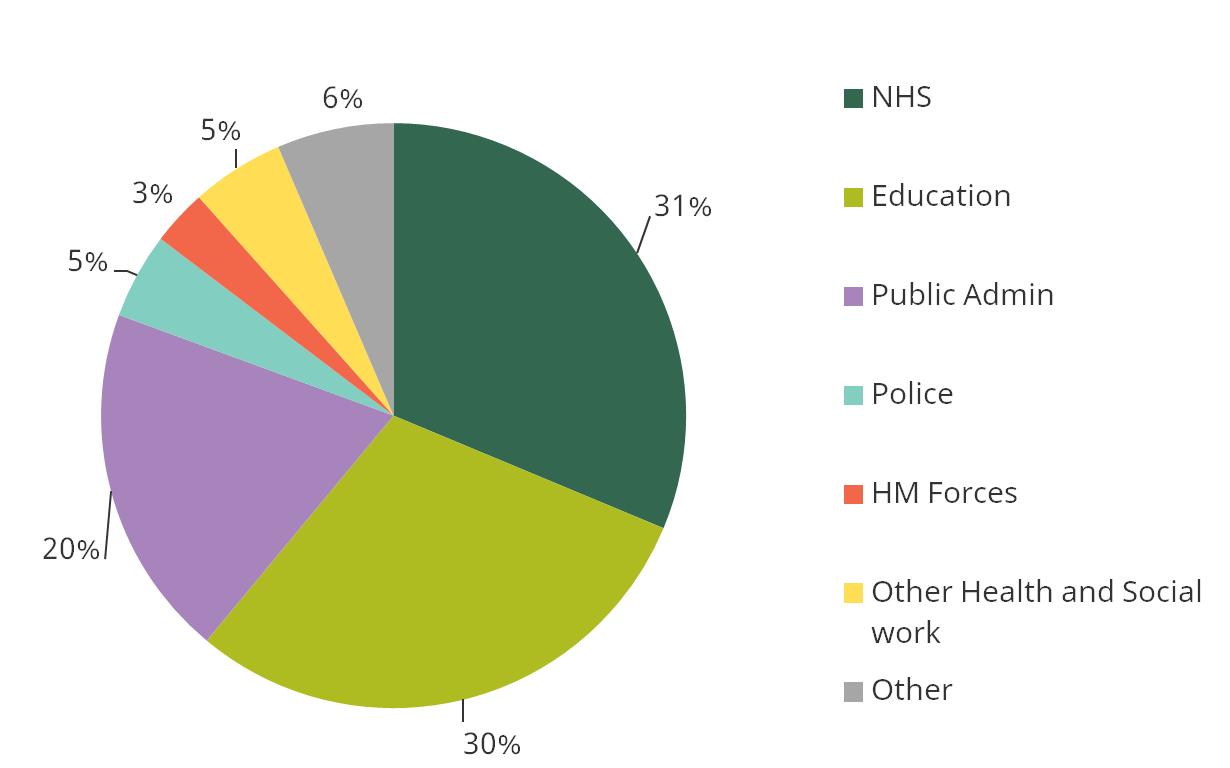 The Figure shows that public sector pay rose relative to private sector pay after the recession, as private sector pay fell sharply in real terms. The public sector pay restraint imposed since 2011 has returned the difference between public and private pay to around its pre-crisis level. However, after multiple years of pay restraint, a number of Pay review Bodies, particularly the NHS and School Teachers Pay Review Bodies have cited that pay restraint is leading to problems of recruiting and retaining the staff that are needed, and motivating the staff that are working there.[5] 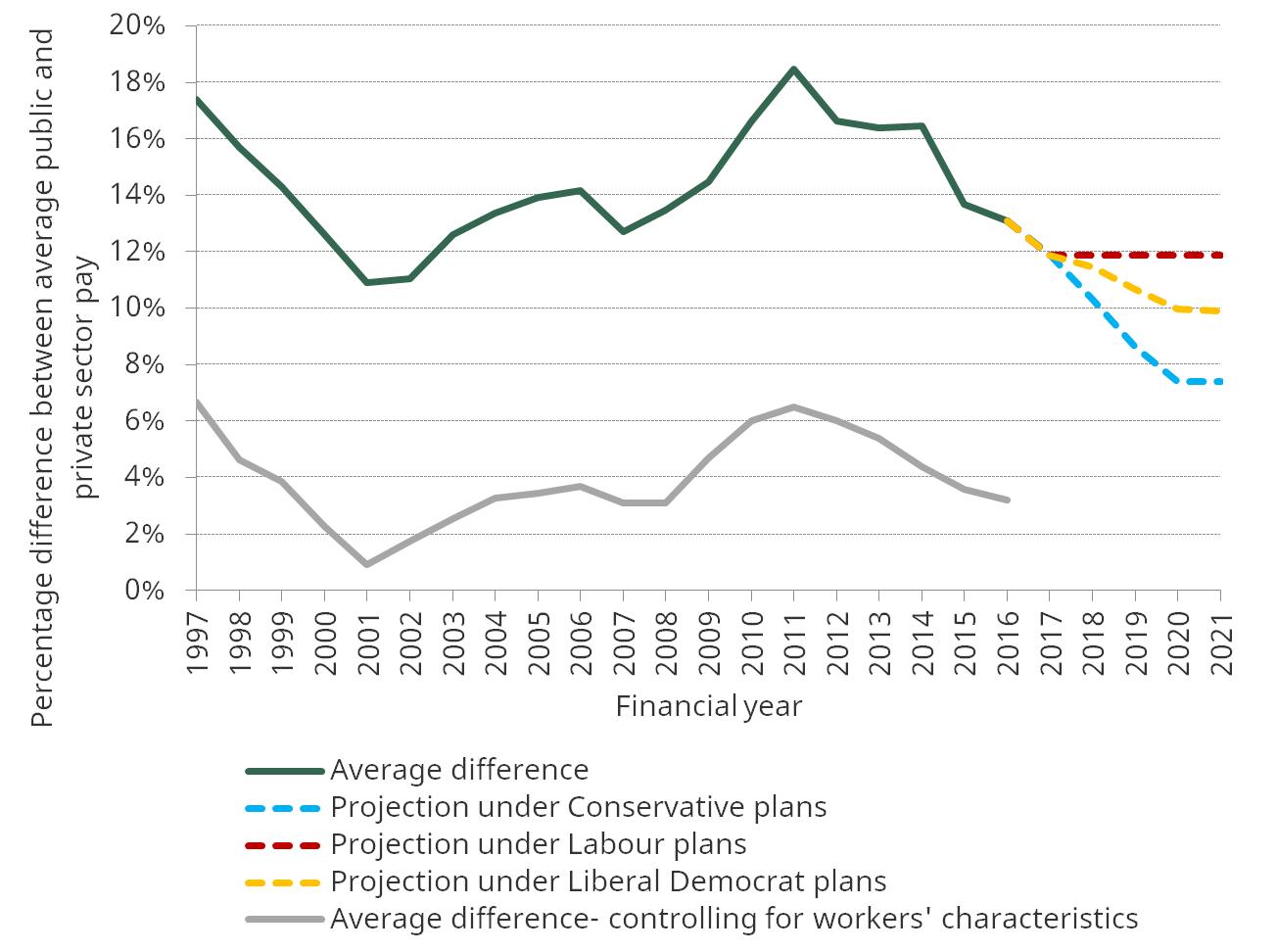 Notes: Data to 2016–17 estimated using Labour Force Survey data (2016–17 only includes up to 2016Q4).  Difference controlling for workers characteristics controls for differences in age, sex, education, experience and region. Projections based on author’s calculations using OBR Economic Fiscal Outlook March 2017, Labour Manifesto and Liberal Democrat manifesto. We assume that a Labour government delegating public sector pay to pay review bodies will lead to them increasing public sector pay at the same rate as private sector pay. We interpret Liberal Democrat policy to be to increase in public sector pay in line with expected CPI inflation in 2018–19 and 2019–20, and delegate decisions to Pay Review Bodies after that.

Using the Office for Budget Responsibility’s latest forecast for earnings growth, and the plans set out in manifestos, we can project the difference between public and private sector pay in coming years. Under the Conservative plans, private sector pay would rise 6 percentage points faster than public sector pay between 2016–17 and 2020–21. This would reduce the average difference between public and private sector pay to a level not seen in (at least) the last 20 years; well below the level seen in the early 2000s when there were shortages of nurses. Given that Pay Review Bodies are currently reporting recruitment and retention problems, the Conservative plans are likely to exacerbate such problems, which could damage the quantity and quality of public services delivered.

Table 1 shows the estimated increase in employment costs to central and local government as a result of the Labour and Liberal Democrats’ plans, compared to the current Conservative government’s policy of 1% increases until 2019–20. These costs include the amount that public sector employers would need to pay in terms of higher employer National Insurance and pension contributions. The figures therefore show the extra amount that departments and local government would need to receive in funding to pay for the higher wage bill, without having to make any offsetting cuts either to the size of the workforce or to non-wage costs.

These Figures are highly sensitive to the forecasts of the economy. For the Liberal Democrats, the cost will be higher if inflation is higher in 2018–19 and 2019–20 than is expected by the OBR currently, or lower if inflation is lower. Under Labour’s policy if private sector earnings growth performs less well over the coming years than is forecast by the OBR (it has consistently underperformed OBR forecasts in recent years), then it would cost less than is implied by Table 1. Conversely, if private sector earnings growth performs better than forecast, and public pay is increased faster too, then the cost to departments and local government of Labour’s policy would be higher too.

Since 2011, there has been significant pay restraint in the public sector. For a number of years this was achieved without significant recruitment and retention issues, probably because public pay had done so much better than private sector pay during the recession. However, these pressures are emerging now, and could harm the quality of public services. There are significant trade offs in the future setting of public sector pay. Restraining public sector pay compared to the private sector, as proposed by the Conservatives, and – to a lesser extent by the Liberal Democrats –risks exacerbating recruitment, retention and motivation problems and ultimately the quantity and quality of public services provided.

[1] See the speech by Jon Ashworth, Shadow Secretary of State for Health to Unison conference on April 26th 2017: http://press.labour.org.uk/post/160008381504/jonathan-ashworth-shadow-health-secretary-speech

[3] For more information, see Figure 2b in Cribb, Disney and Sibieta (2013) “The public sector workforce, past, present and future” https://www.ifs.org.uk/bns/bn145.pdf

[4] These figures do not include non-pay remuneration, such as pensions, which are still much more generous on average in the public sector than the private sector, despite cuts in their value since 2010.

Police workforce and funding in England and Wales

This briefing note provides background information on the police service in England and Wales. It details recent changes in police numbers and in police funding, and examines some indicators of police performance in the light of these changes. Finally, it considers briefly the Labour Party’s proposal to increase the number of police officers.

How does the government spend your money?