This briefing note describes how local authority spending on adult social care has evolved since 2000-01, what could happen to spending under current plans, and the challenges faced by social care in the long run. 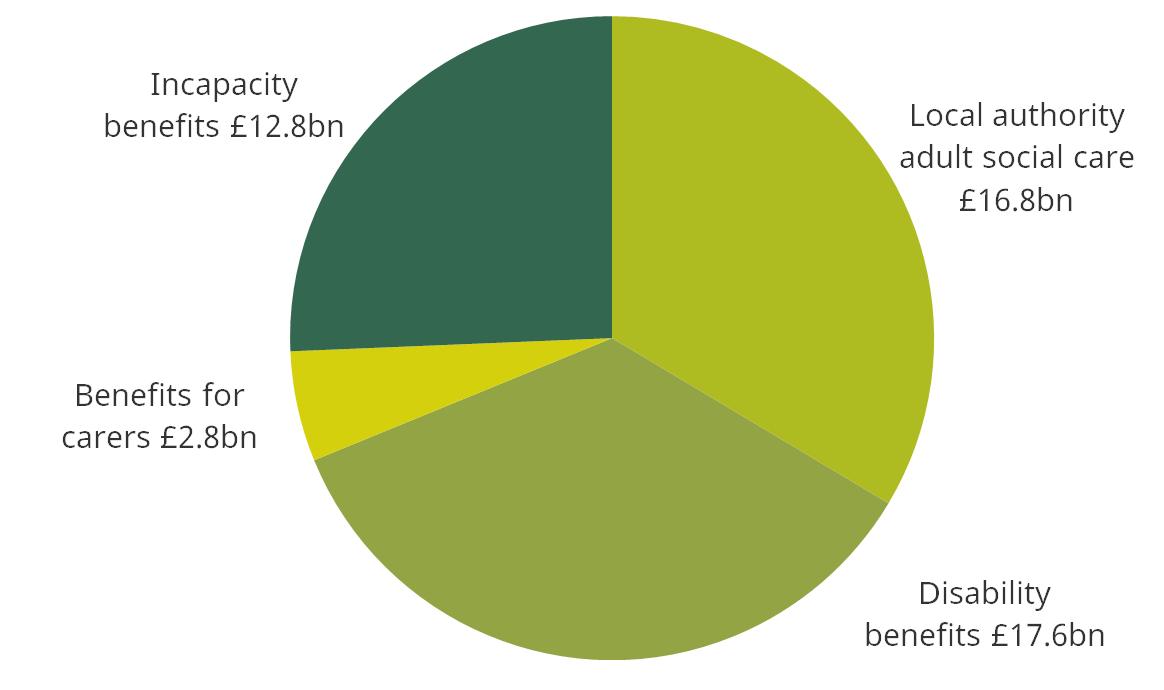 Note: Definitions and data sources for all figures are in Appendix A

In England, it is the responsibility of local authorities to co-fund care services for individuals who have care needs and insufficient financial means to pay for them fully themselves.[1] Minimum eligibility criteria are set nationally, but the amount spent on social care is at local authorities’ discretion. In 2015–16 they spent £16.8 billion (2017–18 prices) on these services.

Local authorities are not the only part of government to contribute to individuals’ care costs. The benefits system provides cash payments to individuals with disabilities to help with their care costs and to compensate them for their inability to work. In addition, though not shown in the figure, if an individual’s care needs are sufficiently severe and strongly related to their healthcare needs, then the entirety of their social care is funded by the NHS under a programme called continuing healthcare.[2]

All three forms of support are important to a full understanding of government assistance for those in need of care, but this note will focus on local authority organised adult social care in England, as this is where the main responsibility for providing access to care lies. 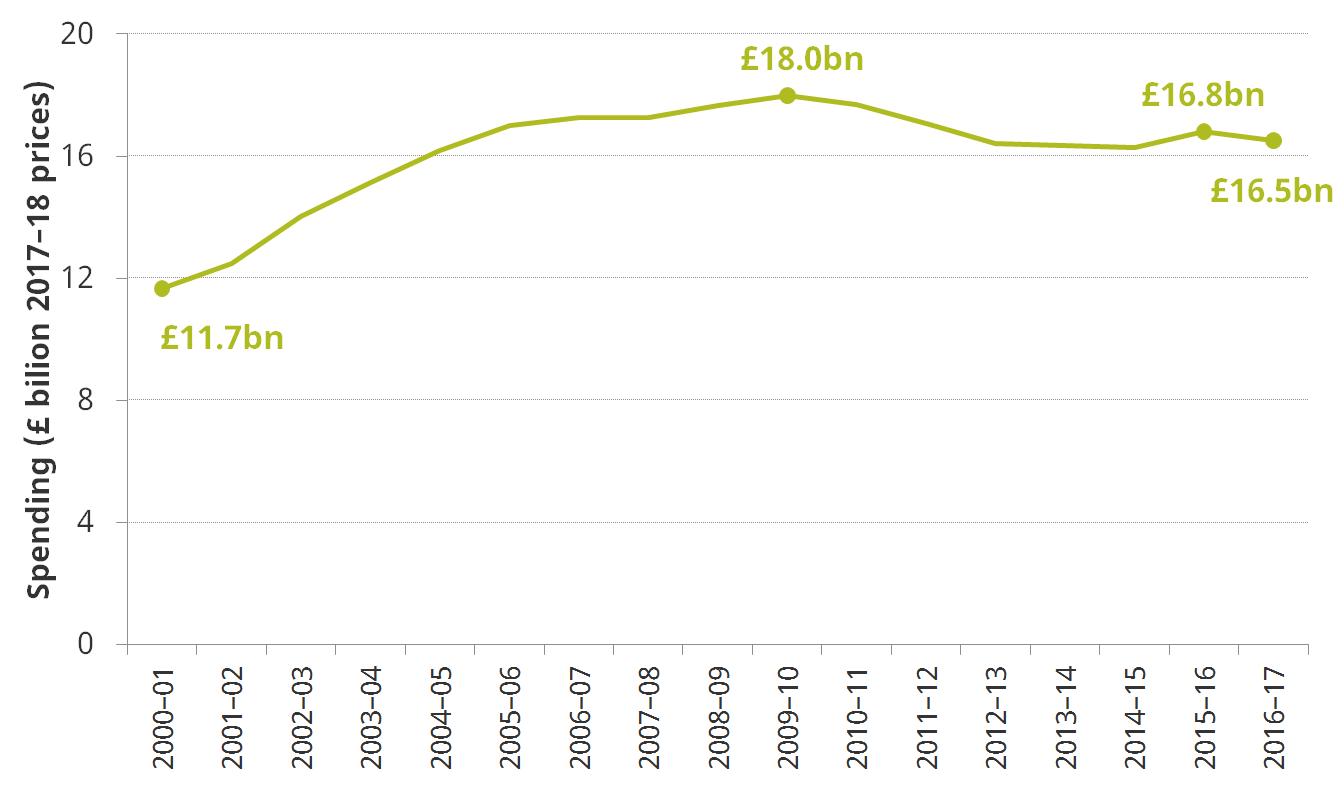 The population has been growing, so spending per adult fell by 13.5%

Cuts have been greatest where spending, and needs, were previously highest

There are clear geographic patterns in the distribution of cuts around the country, as shown in Figure 3. London and the North East made cuts of 18% per adult on average, whilst in the South West cuts averaged just 2%. 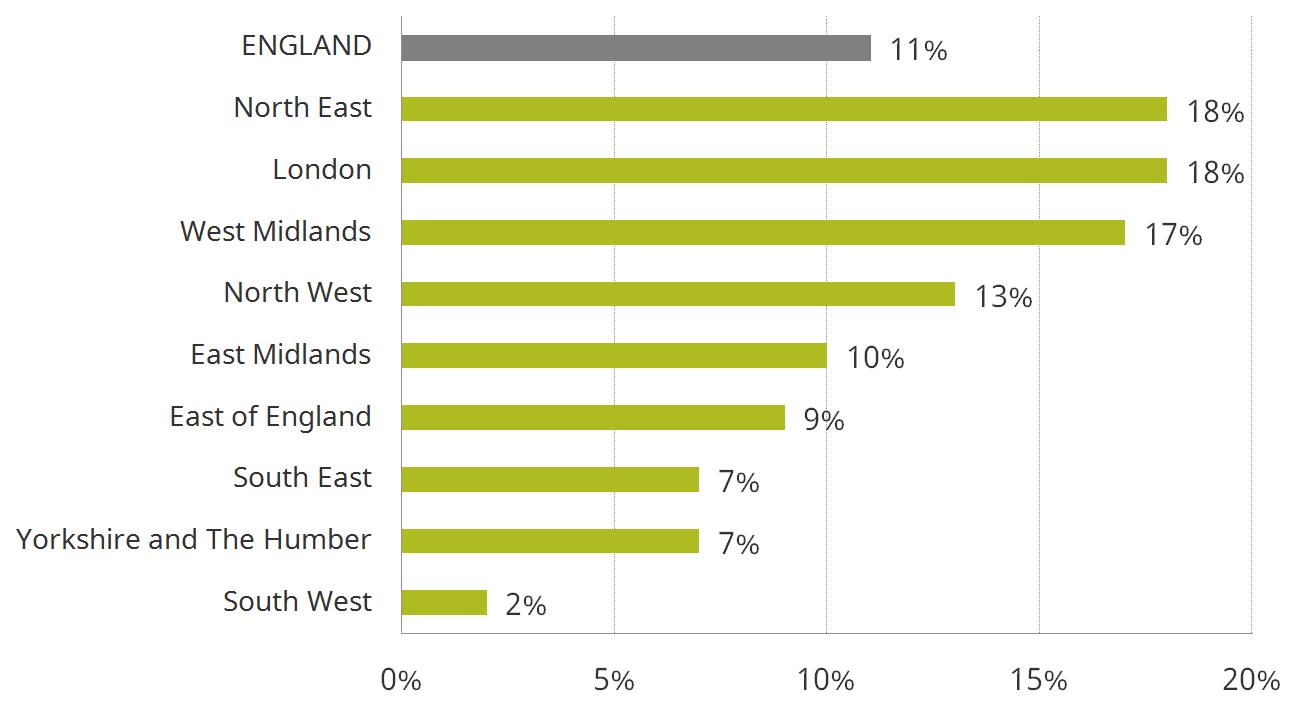 Cuts have also been larger on average in areas with higher social care spending needs, as a result of changes to local government funding over this period. High needs areas typically got more of their funding from central government grants (as opposed to council tax), so faced larger cuts to their total budget over this period. Because social care spending is such a big part of local authority spending, it could not be fully insulated by local authorities, so cuts to these services have followed the same pattern.

Under current plans, councils will have enough money to reverse all social care cuts by 2019-20 if they choose to do so

For the next 3 years, we forecast that councils’ revenues from council tax, business rates and grants (excluding ring-fenced funding for social care) will continue to fall, down a total of 7.2% between 2016–17 and 2019–20 as illustrated in Figure 4 by the lighter green bars. However, on top of this, local authorities will also receive a growing pot of ring-fenced funding for social care, shown as dark green in the same figure. This funding is a mixture of grants (including the Improved Better Care Fund) and potential increases in council tax revenues (called the social care precept, which councils may levy if they wish). Taking into account ring-fenced grants for adult social care, and if all authorities raise the maximum possible from the council tax precept, their total revenues would decrease by just 0.4%. 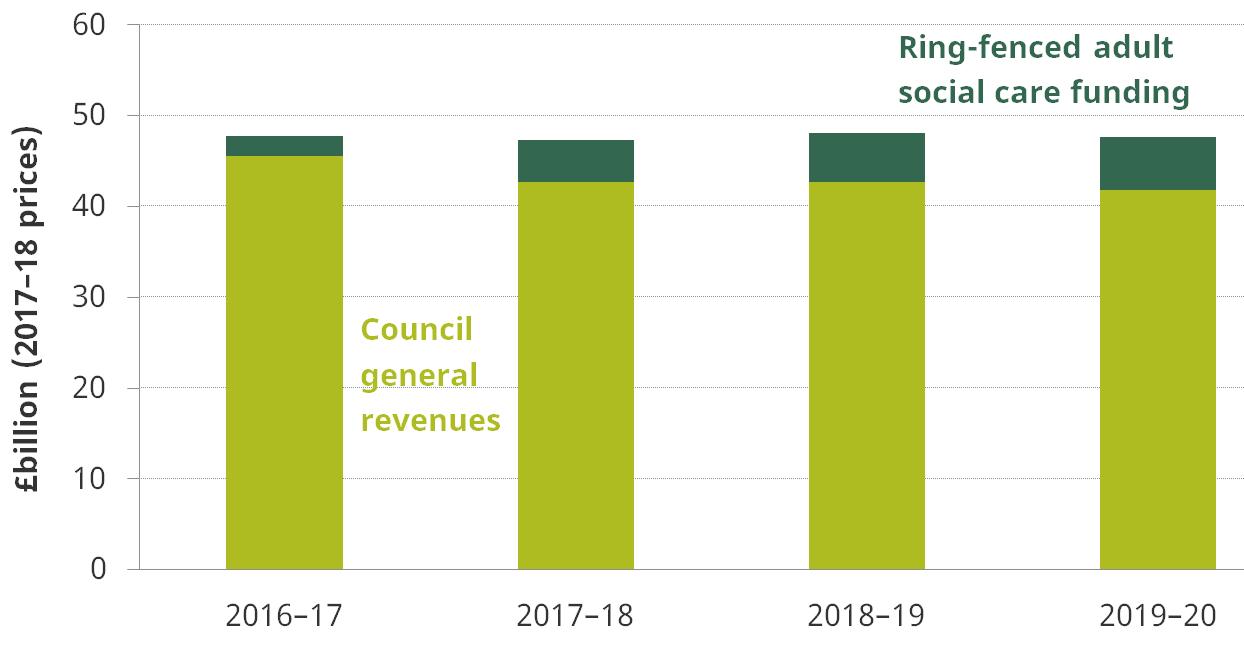 However, there are two caveats to this statement. First, the funds are not sufficient to keep up with the growing population – social care spending per adult would still be 4.8% lower than in 2009–10. This is shown by the darker green line in Figure 5. 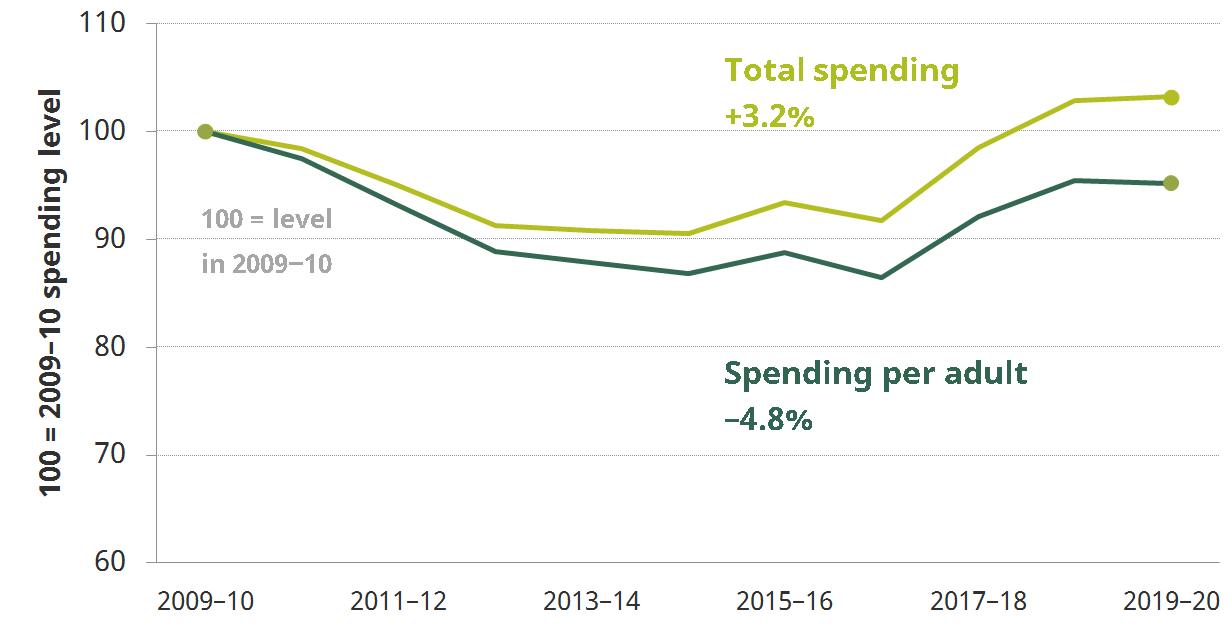 Second, although this funding is ring-fenced for social care, local authorities may have some flexibility to use it for other services. To satisfy the ring-fence they must demonstrate that they are spending more than they otherwise would on adult social care, but it is difficult to prove that they are not. If some of this funding is used for other services then social care spending will not increase by as much as shown in the figure.

Beyond 2020, the future of adult social care spending is uncertain

For the next three years, we know central government plans but not local authority plans. After 2019–20, we know neither. For any government thinking about the long-term future of social care funding, three questions will be particularly important.

How does social care fit into the overall system of local government finance?

Under current plans, from 2020 local government in England will be funded entirely from council tax and business rates. Every few years, a series of tariffs and top-ups will be set that redistribute revenues across the country (from areas with big tax bases to areas with smaller tax bases) on the basis of their relative spending needs. But for a few years at a time, the transfers across the country will be fixed. For areas with growing revenues, this is good, and will strengthen the incentive for councils to try and stimulate local economic growth. But in areas where needs are going up faster than revenues, there is a risk councils won’t be able to meet growing demand for spending.

This means that in the years between ‘resets’, access to social care could become more unequal across the country. Just how unequal depends on the extent of divergence in revenues and needs around the country, the exact parameters that are set for the local government finance system, and whether social care continues to receive special ring-fenced funding outside of the main system of local government finance.

What would it mean to ensure common standards of social care around the country?

Social care spending per adult varies considerably across the country, and only a quarter of the differences can be explained by observed indicators of local need.[3] This has partly been caused by the distribution of cuts to local government funding over the last few years, and planned additional funding (which is to be allocated on the basis of need) would go some way to matching spending with needs.

Nonetheless, a government that wished to guarantee that people with equal need in different parts of the country receive equal care would find it difficult to do so without taking away local authority discretion over spending (and making eligibility assessment more consistent in practice as well as in principle). From the current position, this would entail both a big redistribution of spending around the country, creating both winners and losers, and would mean a huge reduction in the budgets under local authority control and the discretion available to councils in setting local priorities.

What happened to Dilnot?

Under the coalition government, considerable groundwork was laid for radical social care funding reform. The Dilnot Commission, which reported in July 2011, identified that under the current system individuals faced uninsured risk of very large social care expenditures, and that the means test for publicly funded care was a ‘cliff-edge’. The commission’s proposals for a life-time cap on care costs, and higher means test threshold were accepted by the then government, and the Care Act 2014 created the legislative framework for their implementation. However, the outgoing government has delayed the implementation of the bulk of the reforms and instead provided short-term injections of funding for the current system. The problems identified by Dilnot remain, and the next government will have to decide whether it will finally take the step of implementing these reforms.

There has not been a lack of reviews of social care funding in recent years. It is time to see what the political parties actually want to do, and for some real action from whoever forms the next government.

[1] For an overview of the eligibility criteria for adult social care, see section 2 of Phillips and Simpson (2017) National Standards, Local Risks: The geography of local authority funded social care, 2009-10 to 2015–16.

[2] For a brief overview of the NHS continuing healthcare programme, see Annex B of the report in footnote 1.

IFS researcher, Andrew Hood, looks at what is happening to spending in the National Health Service.

IFS Green Budget 2017, in association with ICAEW and with funding from the Nuffield Foundation. The report looks at the issues and challenges facing Chancellor Philip Hammond as he prepares for his Budget in March.